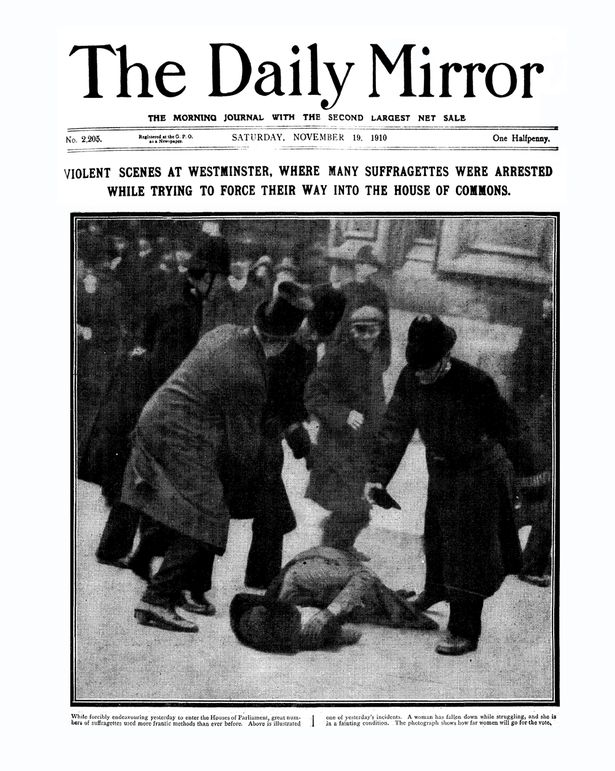 The first image that is fabricated when thinking about protest is the image of chains and railings. Secondary to this is the thought of violence and brutality. This was certainly the case on the 18th November 1910. By invitation of the WSPU, members of the Suffragette moment were requested to join a protest that would storm the House of Commons and also situate outside of Government in Parliament Square. This protest was in response to Herbert Asquith’s announcement stating that he would allow the Bill that would give women the vote “No more time”[1]After Mrs. Pankhurst had warned of the return of militant action should the Bill of Conciliation be ignored[2], the WSPU deployed a 300 strong deputation that would march on Parliament Square and rush the House of Commons. However, as already suggested, the women were not greeted with open arms. As the deployment of women departed in groups of 12 from Caxton Hall London, the atmosphere rapidly turned bitter. On arrival to the House of Commons the women were subjected to a heightened degree of violence not only by uniformed police but by plain clothed officers within the crowd.

It can be interpreted from contemporary sources that the women were met with violence and police brutality. Testimonies of some of the victims that were involved gives us a broad understanding to what extent the brutality took place from the police. One testimony from a women present, Elizabeth Freeman stated “One Policeman… put his arm around me and seized my lefty breast, nipping it and wringing it very painfully, saying as he did so ‘You have been waiting for this for a long time, haven’t you’”[3] This form of humiliation torture was only one tactic used by the police on Black Friday. The photograph that was produced and published on the front page of the Daily Mirror the following day shows a women by the name of Ada Wright huddled on the ground after what can only be described as a brutal attack from the enforcers of the law.

This photo that adorned the front page of the Daily Mirror in its self was at the centre of controversy as Government attempted to have the photo banned from print, however by the time the photo was printed and sold it was too late as the morning papers had already hit the streets. This leads us to a question. Why did Government want the photo banned? Was it for the protection of the law enforcement or was it for the future protection of the suffragette?

Black Friday was not a one off occurrence. Many contemporaries believe that it was an official order given to the police, that arrests should not be made but to use force. However, Wingerden expresses the difficulty in gaining the truth behind the events that took place on Black Friday as there are many varying accounts form the day.

One interesting contemporary piece that I discovered in my research was an illustration from the world renowned Punch Magazine. The satirical piece by Arthur Wallis Mills depicts a Suffragette using the martial art of Jiu-jitsu to defend herself from the scorn of the surrounding police entourage. In Punch’s usual comedic format, the interpretation one can receive from the piece is never to cross a women scorn. It is also interesting to view the position of the police, although there are many, it seems the cause of suffrage is too mighty for the institution and establishment to conquer. Another point of interest is the artists use of Empire within the piece. One would imagine the sport that is traditionally associated with Britain is Boxing, yet the artist has chosen to express the fighting spirt from a sport of Asian origin.

An article from the Historical Research Journal written by C.J.Bearman explores the mythology that surrounds the horrific events of Black Friday. Bearman eludes many important factors that occurred during this event and other similar cases. For a complete read of the article click on the link below.