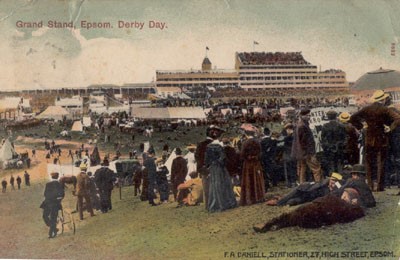 As the social elite gathered for what was to be one of the most prestigious events in the social calendar, The Epsom Derby, unknown to the eagerly awaiting crowd tragedy was to strike. On June 4th 1913, an array of people from different social standings ventured to the annual races that had took place at the Epsom Race Course since the reign of King George III in 1780. Amongst the hordes of spectators’ was an aspiring activist for the suffragette movement by the name of Emily Wilding Davison. Davison’s actions on this very day would mark one of the most significant events not only for the suffrage movement but as an iconic event of the 20th century.

Davison, a respected teacher from London had previous involvement with the WSPU and was known to have been one of the Union’s more ‘erratic members’[1]. In 1911 it had been reported that she had set alight to a letter box in an act of militancy in the name of the WSPU, however she had not been sanctioned by the union at this time[2]. On a separate incident, her belief in the cause of women’s suffrage was greatly displayed after her attempted suicide whilst in prison where she threw herself from a balcony in hope her death would lead to martyrdom. Davison throughout her militant actions had been imprisoned on 9 separate occasions and was subjected to being force-fed 49 times.

As the crowd of spectators anxiously awaited in the glow of the afternoon sun, the biggest race of the day was about to commence.  At 15:10 the horses galloped towards Tattenham Corner, Emily Wilding Davison emerged from the crowd, passed under the guarding rail towards the stampeding horses in attempt to pin the colours of the suffragette movement onto the Kings horse, Anmer. The crowd watched in horror as Davison was ploughed to the ground. The onlookers rushed to the traumatic site to observe Davison in an unstable condition.

Dr Vale-Jones who was a spectator at the Derby made his way through the crowd to attend the critically injured Davison. Dr Vale-Jones immediately knew how critical Davison condition was. From his eyewitness report that is now housed at the National Archives in London, Dr Vale-Jones describes the moments he attended Davison before she was taken to Epsom Cottage Hospital.

‘I found her suffering from concussion of the brain and heart failure and her life ebbing fast… I called for brandy or whisky, and a policeman brought me the latter, but this had but little effect to save life. A nurse then came up to my assistance. I said to her “she is slipping out fast, I must have hot water”.  None to be had I then sent a policeman to obtain a thermos flask that contained very hot tea, which I could hardly stand the touch. I then took the nurse’s handkerchief and poured some of the contents on and applied it to the left wrist. The second application had the desired effect of restoring the heart action.’ [3]

Four days following the tragic event, Emily Wilding Davison died in hospital due the injuries sustained in the fatal attempt to promote the suffrage movement. Whilst the British press described the act of Emily Wilding Davison as an ‘ act of a madwomen’ the suffragette newspaper, that was edited by Christabel Pankhurst hailed Davison as a Martyr. As a devoted member to the suffragette cause, Davison was willing to end her life for something she strongly believed in.

The effects of the death of Emily Wilding Davison sparked cataclysmic reaction in London and across Britain.  Davison’s funeral procession through London attracted both mourners and anti-suffragists who would attempt to glance at the coffin as it was pulled through the streets of London on a horse drawn carriage.